Posted by Water Treatment in Corrosion | one response

Corrosive and scale-forming waters are at the opposite ends of a spectrum. A variety of water characteristics combine to influence water’s location along this spectrum. The goal of the corrosion control in water treatment is to render the water stable and will neither corrode pipes nor form scale.

The chemical characteristics such as alkalinity, hardness and pH of the water flowing through a pipe will influence corrosive reaction. The below table summarizes characteristics of corrosive water and of scale-forming hard water.

The graph shown below is known as the Baylis Curve. It shows the relationship between pH, alkalinity, and water stability. Water above the lines is scale-(orming while water below the lines is corrosive. Stable water is found in the white area between the lines.

Other chemicals and compounds such as oxygen, carbon dioxide, and dissolved solids found in water also influence the corrosion process. Oxygen reacts with hydrogen gas at the cathode, causing depolarization and speeding up the corrosion. As a result, water with a high D.O. (dissolved oxygen) will tend to be corrosive. Other oxidizing agents such as nitrate and chlorine can perform the same function, although they are less common. Carbon dioxide in water also tends to cause corrosion. The carbon dioxide gas can combine with water to form carbonic acid, which lowers the pH of the water and a low pH promotes corrosion. Dissolved solids are typically present in water as ions. These ions increase the electrical conductivity of the water, making the electrolyte more effective. Thus, they will increase the rate of corrosion. 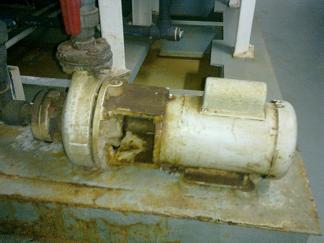 Effects of Bacteria on corrosion

Bacteria can both cause and accelerate the rate of corrosion. In general, bacterial colonies on pipe walls accelerate corrosion below them due to oxygen cell concentration, causing increased pitting and tuberculation. Like humans, some bacteria produce carbon dioxide, which can combine with water to become carbonic acid and accelerate corrosion. Iron bacteria also block the deposition of calcium carbonate scale on the pipe walls. Sulfate-reducing bacteria in addition to causing corrosion produce a distinctive rotten egg smell.

One Response to “Corrosion in Water Treatment”