Posted by Water Treatment in Disinfection | no responses

In this era of pollution awareness, a great deal of interest is centered upon the improvement of these effluents for industrial and agricultural reuse. The ultimate goal is of course reclamation of these effluents for industrial and agricultural reuse. the properties of chlorine dioxide make it an interesting possibility for special situations, as confirmed by laboratory studies by Bernarde et al. these studies attempted critically to compare the bactericidal efficiency sewage effluent to which a known cell density of E.Coli had been added. The effluent was poised as pH 8.5 and had a BOD of 160ppm. It is significant to note that a 5 ppm dose of chlorine a 90 percent kill after five minutes, compared with a chlorine dioxide dose of 2.0 ppm, which gave nearly 100 percent kill in thirty seconds. Dosages of approximately 2.25 ppm of chlorine were used, as compared to 0.9 ppm of chlorine dioxide. This information should give considerable impetus for plant scale investigations of the use of chlorine dioxide for disinfection of certain waste water effluents. 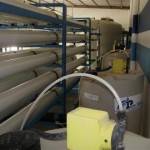