An aerated lagoon is a suspended-growth process in waste water treatment unit. The aerated lagoon water treatment system consists of a large earthen lagoon or basin that is equipped with mechanical aerators to maintain an aerobic environment and to prevent settling of the suspend biomass. It is provided with inlet at one end and outlet at the other end to enable the wastewater to flow through and to retain for the specified detention time. Initially, the population of microorganisms in an aerated lagoon is much lower than that in an ASP because there is no sludge recycle. Therefore, a significantly longer residence time is required to achieve the same effluent quality. However, this longer residence time may be an advantage when complex organic chemicals are to be degraded. Also, the microorganisms in aerated lagoons are more resistant to process upsets caused by feed variations than those in ASP because of the larger tank volumes and longer residence times used. The major difference between the ASP and aerated lagoons is that in the latter settling tanks and sludge recirculation arrangements are absent. The aerated lagoons water treatment may be provided with maturation pond for further treatment of effluent as shown below. 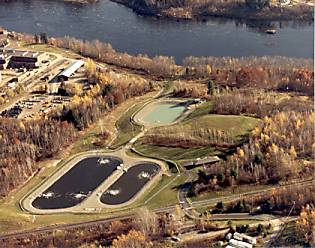 Suspended growth aerated lagoons are relatively shallow earthen basins of depth varying from 2 to 5 m provided with mechanical aerators on floats or fixed platforms. Mechanical aerators are used to provide oxygen for biological treatment of wastewater as well as keep the biological solids in suspension. They are fully aerobic from top to bottom as the aeration power input is sufficiently high to keep the solids in suspension with complete mixing. No settlement occurs in such lagoons and under equilibrium conditions the new (microbial) solids produced in the system equal to the solids leaving the system. Thus, the solids concentration in the effluent is relatively high and some further treatment is generally provided after such lagoon.

Because of a suspended growth system of a complete mix reactor without recycle, the basis of design is SRT, which is equal to HRT under ideal flow condition. Typical design values of SRT for aerated lagoons used for treating domestic wastewater vary from 3 to 6 days

Mixing of water is beneficial from several points of view. Without mixing thermo stratification will occur, thereby permitting the retention of undisturbed surface layers for relatively long periods of time. Such conditions provide an excellent environment for algae to become established and grow. Mixing will also exhaust the carbon dioxide from the system. At lower mixing intensities, algae will grow provided the HRT is sufficient. Mixing is provided by the aeraters.

The aerators can be either fixed type or floating type.

Fixed type aerators  are mounted on structural columns and carefully leveled with regard to the outlet weir level to ensure required submergence of aerator blades to give the oxygenation capacity. Floating type of aerator  is mounted on pontoons. They have the advantage of being able to adjust themselves to actual levels in the lagoon due to fluctuating inflows and or seepage. 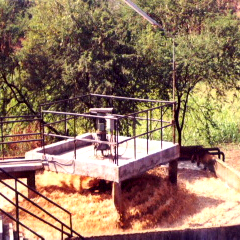 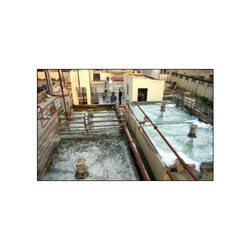 The placement of the aerators in waste water treatment system is an important aspect in achieving effective dispersion of the oxygen and mixing with sufficient overlap of the dispersion and mixing zones. Because so many different types of aerators used in aerated lagoons, manufacturer’s literature should be consulted to determine appropriate aerator spacing. Maximum spacing between surface aerators should not exceed 75 m. In general, a number of smaller aeration devices, spaced more closely, will be more effective than a few larger devices. For depths greater than 4.0 m aerator with draft tubes may be considered to prevent solids deposition.