Types of Bacterias in Sewage

In presence of a good amount of dissolved / free oxygen above 8 ml per liter organic compounds in sewage undergo a process of oxidation brought about by aerobic bacterias and the oxidation products are inoffensive smelling, non-putrefying nitrites, nitrates, sulphates, phosphates, etc. This kind of oxidation of sewage is called ” aerobic oxidation “. 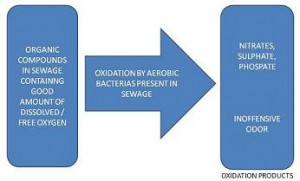 On the other band, when the dissolved or free oxygen supply is below a certain value, the sewage is called stale and anaerobic bacterias bring about petrification producing methane, hydrogen sulphide, ammonium sulphide and phosphate, which give offensive odor. This kind of oxidation of  sewage is called ” anaerobic oxidation “. It may be pointed here that in an anaerobic oxidation. The bacterias extract combined oxygen contained in organic matter, nitrates, nitrites and sulphate of sewage ween the anaerobic decomposition is containing, the sewage is known  ‘ septic sewage ‘.