Secondary facultative ponds, which receive settled wastewater (usually the effluent from anaerobic ponds) are 1.20 – 1.50 meters deep. They are designed for BOD removal on the basis of a relatively low surface loading of 100 – 400 kg BOD/ha-d at temperature between 20°C and 25°C to permit the development of a healthy algal population as the oxygen for BOD removal by the bacteria is mostly generated by algal photosynthesis. Due to the algae facultative ponds are colored dark green. The algae that tend to predominate in the turbid waters of facultative ponds are the motile genera (such as Chlamydomonas, Pyrobotrys and Euglena) as these can optimize their vertical position in the pond water column in relation to incident light intensity and temperature more easily than non-motile forms (such as Chlorella, although this is also fairly common in facultative ponds). The concentration of algae in a healthy facultative pond depends on loading and temperature, but is usually in the range 500-2000 ug chlorophyll per litre.

Effluent from the anaerobic pond enter in the secondary facultative pond is converted into carbon dioxide, water and new bacterial and algae cells in the presence of oxygen. Algae populations within the aerobic pond require sunlight for photosynthesis. They develop and produce oxygen in excess of their own requirements. ‘This excess oxygen is used by bacteria to further break down the organic matter within the effluent. The algal production of oxygen occurs ncar the surface of aerobic ponds to a depth of about 500 mm to which light can penetrate. Oxygen can also be introduced by wind. Aerobic pond is more accurately termed facultative, as in practice the pond usually boson aerobic upper layer and anaerobic lower layer. This facultative condition occurs because high oxygen levels cannot be maintained to the total depth of aerobic ponds. Sue fully aerobic surface layer develops, along with an aerobic /anaerobic intermediate layer, and a fully anaerobic layer on the pond bottom.

As a result of the photosynthetic activities of the pond algae, there is a diurnal variation in the concentration of dissolved oxygen. For a typical facultative pond, the water column will be predominantly aerobic at the time of peak sun radiation and predominantly anaerobic at sunrise. After sunrise, the dissolved oxygen level gradually rises to a maximum in the mid-afternoon, after which it falls to a minimum during the night. At peak algal activity carbonate and bicarbonate ions react to provide more carbon dioxide for the algae, so leaving an excess of hydroxyl ions with the result that the pH can rise to above 9 which kills faecal bacteria. The wind has an important effect on the behavior of facultative ponds, as it induces vertical mixing of the pond liquid. Good mixing ensures a more uniform distribution of BOD, dissolved oxygen, bacteria and algae and ..hence a better degree of waste stabilization. In the absence of wind-induced mixing, the algal population tends to stratify in a narrow band of about 20 cm thick, during daylight hours. This concentrated band of algae moves up and down through the top 50 cm depth of the pond in response to changes in incident light intensity, and causes large fluctuations in effluent quality (especially BOD and suspended solids). The processes in the facultative pond are shown in Fig. 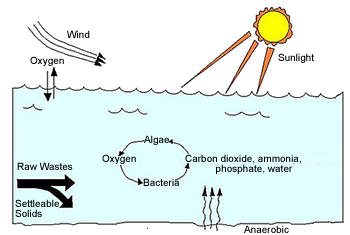 Processes in the facultative pond

Sometimes two or more consecutive smaller facultative ponds are constructed instead of a very large one. This may be more practical for effective desludging and stirring or when the pond is too long for the site and interferes with existing structures.

BOD Removal in Facultative Fends: The activity of further anaerobic oxidation and the aerobic conversion of effluent to carbon dioxide, water and new bacterial and algae cells can result in removal 01 00% of the BOD, of the effluent flowing into the facultative pond (which means an overall removal in the order of 95% over the two ponds).

This removal, and the subsequent quality of the outflow, depends on:

Moreover, as a result of the algal-bacterial activities described in the previous section, a high proportion of the BOD that does not leave the pond as methane ends up as algal cells. Thus in secondary facilitative ponds sewage BOD is converted into algal SOD and this has important implications for effluent quality requirements. This provides even better BOD quality of the effluent from facultative ponds as most of them will be algal BOD.