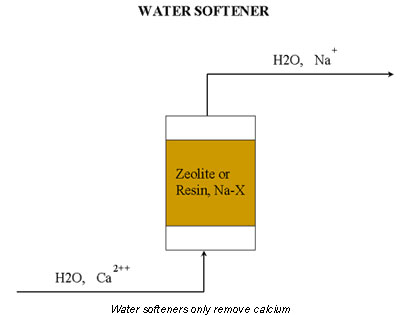 During treatment, water enters the softener and is directed by a baffle. The water passes through a bed of resin underlain by a bed of gravel, and then is collected by an under-drain and piped out of the softener.

Since sodium ions do not cause hardness, the treated water is no longer hard. In a properly operating softener, the treated water will have a zero hardness. To prevent corrosion due to excessively soft water, some quantity of the source water is blended with the softened water downstream of the softener to ensure that the product water has permissible hardness. Ion exchange softening is effective at removing both carbonate and non carbonate hardness and is often used for waters high in non carbonate hardness and with a total hardness less than 350 mg/L.

Disadvantages of Ion – exchange softening are:

*However, ion exchange softening has its disadvantages as well. The calciumand magnesium in the hard water are replaced by sodium ions, which may cause problems for certain people with health problems.

* Softeners have to be backwash in a manner similar to a water filter, and the recharge water, known as brine, can cause disposal problems.

After backwash, the softener is ready to be regenerated. This is the part of the process in which the magnesium and calcium ions on the resin become replaced with sodium so that the softener can be used to treat more hard water. In order to regenerate the resin, a salt solution, known as brine, is allowed to flow through the softener for about an hour.

When dissolved in water, the salt dissociates into its constituent ions – Na+ and CI: The sodium ions replace the calcium and magnesium ions on the resin in the following manner (where “R” preceding an ion means that the ion is bound to the resin.

Regeneration of Resins in Softener

During regeneration, calcium chloride, magnesium chloride, and excess sodium chloride flow to waste. The Above figure shows the regeneration process in ion exchange softener. After the brine has been given a sufficient contact time, it must be rinsed out of the softener. During the rinse cycle, fresh water is passed through the unit as it would be during treatment, but with the effluent going to waste. Rinse usually takes about 20 to 40 minutes. Both the spent brine from regeneration and from the rinse must be disposed of carefully since the calcium, magnesium, and sodium salts are corrosive and toxic to the environment. Spent brine is sometimes discharged in sewers or into streams at very high dilutions. Alternatively, the brine can be disposed of in a landfill.