Details of Different types of media for Filter Beds

In rapid sand water treatments filters, finer sand grains are at the top of the sand layer with larger grains farther down into the water treatment filter. As a result, the water filter removes more suspended material in the first few cm thick of the filter. In the high rate filter, the media size decreases. The top layers consist of a coarse material with the finer material further down, allowing the suspended material to penetrate deeper into the filter.

The material in a water treatments filter bed forms layers in the filter, depending on their weight and specific gravities. In the coarse layer at the top, the larger suspended particles are removed first, followed by the finer materials. This allows for longer filter runs at higher rates of filtration than is possible with rapid sand water filters.

In many cases, multiple types of media are layered within the filter. Typically, the layers (starting at the bottom of the filter above gravel and advancing upward) are sand and anthracite coal, or garnet, sand, and anthracite coal. The below Figure shows a cross-section through a dual media filter. 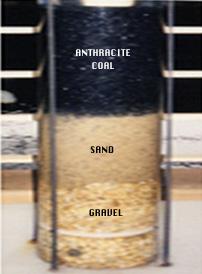 Cross Section of a Medea-Filter

The media in a dual or multimedia filter must have varying density as well as varying pore size so that they will sort back into the correct layering arrangement after back washing. Anthracite coal is a very light (low density) coal which will settle slowly, ending up as the top layer of the filter. Garnet is very dense sand which will settle quickly to the bottom of the filter.

Causes of Taste and Odor

Taste and odor can enter water in a variety of manners. Surface water sources can become contaminated through algal blooms or through industrial wastes or domestic sewage introducing taste- and odor-causing chemicals into the water. Groundwater supplies can be affected with dissolved minerals, such as iron and manganese. Tastes and odors can also enter in the raw water transmission system and in the treatment plant due to algal growths, accumulated sludge or disinfection byproducts. In the distribution system in addition it can cause due to cross-connections and low flow zones.

Methods for Removing Taste and Odor

The best way to treat taste and odor problems is prevention. Algal blooms in reservoirs can be prevented by using copper sulfate while algae growing on walls of the treatment plant basins can be removed through shock treatment with chlorine. In the distribution system, periodic flushing and maintaining adequate chlorine residual will keep the pipes clean and odor free.

The choice of an active water treatments method for taste and odor problems depends on the cause of the problem. Active water treatment may involve using ion exchange units, air stripping, performing chemical or mechanical oxidation, or performing adsorption. If the tastes and odors are associated with color and turbidity or with floating algae, then optimizing the coagulation/flocculation, sedimentation, and filtration processes may take care of the problem.

Oxidation is another frequently used method to remove tastes and odors. Oxidation can be either mechanical (using an aerator) or chemical (by adding chlorine, potassium permanganate, ozone, or chlorine dioxide.) Use of aerators is usually only effective at removing tastes associated with iron and manganese. In other cases, chemicals must be used. Chlorine is the most widespread chemical used for oxidation of tastes and odors since chlorine is already in use in many treatment plants as a disinfectant. When using chlorine to oxidize taste and odor problems, the dosage of chlorine must be greater than that used for disinfection, a method called super

chlorination. After super chlorination has removed the taste and odor problems, the excess chlorine must be removed from the water, which can be achieved using granular activated carbon. Other chemicals used for oxidation include potassium permanganate, chlorine dioxide, and ozone.

Adsorption is a treatment method to treat taste and odor. This material used in absorption, known as the adsorbent, has a very large surface area with pores to allow the removal of large amounts of contaminants. The most common material is activated carbon which is formed when carbon from wood, coal, peat, or nut shells is exposed to heat in the absence of oxygen. The popularity of activated carbon stems from its lack of specificity which allows it to treat many different taste and odor problems.

Charcoal absorbs many substances, ranging from colored organic particulates to inorganic metal ions. Charcoal has been used to remove the color of raw sugar from various sources. Carbon containing substances are charred at less than 900 K to produce carbon in the manufacture of activated carbon. However, the carbon is activated at 1200 K using oxidizing agent to selectively oxidize portions of the char to produce pores in the material. Because of the special process to produce these materials with high surface to mass ratio, they are called activated carbon rather than activated charcoal. Factors affecting the absorption are particle size, surface area, pore structure, acidity (pH), temperature, and the nature of the material to be absorbed. Usually, adsorption (absorption) equilibrium and rate of adsorption must be considered for effective applications.

Treatment involves adding PAC to water, allowing the PAC to interact with contaminants in the water, then removing the PAC by sedimentation or filtration. The feed location of PAC can be at any point prior to water treatment filtration. The most common location is the flash mixer or flocculator since these pieces of equipment will mix the PAC into the water very well. Regardless of the feed location, PAC can be added to water using either a dry feeder or as a slurry. Dry feeders are most often used in small plants when PAC is fed at intervals in response to periodic taste and odor problems. In contrast, slurries (mixtures of PAC with water) are used in larger plants or when PAC is fed continuously.

The effectiveness of PAC in adsorbing tastes and odors depends on adequate mixing, contact time, dosage, and on the cause and concentration of the taste/ odor problem. The dosage usually ranges from 1 to 15 mg/L but must be much higher, in the range of 100 mg/L or more, when-the PAC is being used to remove trihalomethanes or trihalomethane precursors.

Granular activated carbon, also known as GAe, has a larger particle size than PAC with an associated greater surface area. Like PAC, GAC can remove trihalomethane precursors as well as taste and odor compounds.

Water Treatment by activated carbon is mostly due to adsorption or absorption. When a chemical species is adhered to the surface of a solid, it is an adsorption. When partial chemical bonds are formed between adsorbed species or when the absorber got into the channels of the solids, we call it absorption. However, these two terms are often used to mean the same, because to distinguish one from type from the other is very difficult.

GAC is used as a filter medium, either as a layer in a rapid-sand filter or in a separate filter known as a GAC contactor. When contactors are used, the contactor is placed downstream of the filter so that turbidity won’t clog the contactor. Like filters, contactors must be designed to provide adequate contact time of water with the filter medium. Contact time should be about ten minutes. Washing a GAC water treatment filter involves back washing with a 50% bed expansion and surface washing. back washing and surface washing are not the only cleaning required for the units. Once the GAC has reached its adsorption capacity, it must be regenerated using the same heating process used to activate the carbon. In many plants, GAC is simply replaced rather than investing in the equipment required for regeneration.

GAC and PAC each have advantages and disadvantages. In general, PAC is used more often due to the low initial cost and to the flexibility of dosage which allows the PAC concentration to be adjusted to deal with changing contaminant levels. However, PAC has a high operating cost if used continuously, cannot be regenerated, produces large quantities of sludge, and can break through filters to cause dirty water complaints by the customers. In addition, the dust resulting from the small particles of PAC make handling difficult. GAC becomes a more economical choice in larger systems or where taste and odor must be controlled continuously. Disadvantages of GAC include a high initial cost to buy the filter or contactor, and the tendency of GAC filters to grow bacteria.

The Freundlich and Langmuir isotherms, which are the equations commonly used to understand adsorption under a variety of circumstances, is not used in day to day operation of the plant.

It removes taste and odours in the feed water.

Types Of Filters in Water Treatments

One Response to “Water Treatment Filters”