Most metals (with the exception of noble metals such as Au, Pt  exist in nature in such combined forms as their oxides, carbonates, hydroxy carbonates, sulfides, chlorides and silicates. These are reduced to their metallic states from their ores during their extraction processes. During extraction of metals, considerable amount of energy is required. Consequently, isolated pure metals can be regarded in excited state (a higher energy state) than the corresponding ores and they have a natural tendency to revert back to combined state (or lower energy state). Hence, when metals

e put into use in various forms, they are exposed to environment, such as dry gases, moisture, liquids, etc., the exposed metal surface begins to decay (i.e., conversion into more stable metal compounds) more or less rapidly. In other words, destruction or deterioration of the metal starts at the surface. This type of metallic destruction may be due to direct chemical attack by the environment or electro-chemical attack (i.e., similar to reactions in a Daniel cell).

Any process of deterioration (or destruction) and consequent tom of a solid metallic material, through an unwanted (or unintentional) chemical or electro-chemical attack by its environment starting at its surface is called corrosion,

Thus, corrosion is “a process reverse of extraction of metals”. 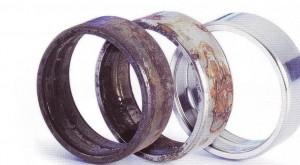 It may be pointed here that erosion and abrasion of metals, although also starts at metal, yet are quite different from corrosion. When some external mechanical agencies destroy the metallic body it may be abrasion or erosion. On the other hand, corrosion attack is either chemical or electro-chemical in nature. The most familiar example of corrosion is rusting of iron, when exposed to the atmospheric conditions. During this a layer of reddish scale and powder of oxide (FeS04) is formed and the iron becomes weak. Another common example is formation of green film of basic carbonate [CuCO3+Cu(OH)2] on the surface of copper, when exposed to moist-air containing carbon dioxide. Other examples are the reaction of chlorine gas with tin or magnesium or the rapid oxidation of calcium and magnesium by oxygen at ordinary temperatures and of other metals at elevated temperatures. The term ‘corrosion’ is not, usually, applied to the undesirable or destructive alteration in non-metallic materials by weathering or other agents

2 Responses to “Metal Corrosion and Protection”