Effects of Corrosion and Scaling

Corrosion, like that shown below, can cause economic, health, and aesthetic problems.

Economic problems result from damage to pipes, storage tanks, valves, and meters. Damage to pipes is the most prevalent, consisting of leaks and reduced carrying capacity of pipeline. Water Treatment Pipe corrosion problems often result from tuberculation which is the production of mounds of rust on the inside of the pipe as shown below 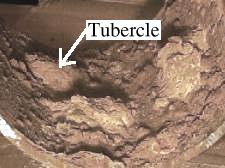 Tubercles in the Pipeline

These mounds reduce the cross sectional area of the pipe available to carry water, just as scaling does. In addition, tubercles are usually associated with pits in the pipe wall, which may go all the way through the pipe and cause leaks.

When pipes in the water treatment distribution system are corroded, some of the metal from the pipes enters the drinking water and resulting health hazards to consumers.

When metal pipes corrode, the rust can break free and be carried in the water supply distribution system as red water, can stain laundry and plumbing fixtures and also results in taste problems.

Unstable water causes problems mainly in the distribution system. Scaling is problematic because it forms in the insides of pipes and reduces the cross sectional area available to carry water. In addition, scaling can form on equipment and on hot water heaters and cause other problems.

Despite these problems caused by scaling, a small amount of scale is beneficial because it coats the insides of pipes and retards corrosion.

Corrosion is an electrochemical reaction involving the movement of electrons. In a battery, electrons build up in the negative end (the anode) and the positive end (the cathode) is attractive to electrons due to its positive charge. If the two ends of the battery are connected with a conductive object such as a metal wire electrons can flow through which from the anode to the cathode as an electric current. Corrosion in a pipe, acts in the same manner as a battery. A negative area of metal (the anode) is connected to a positive area (the cathode) by the pipe wall itself as shown below. As a result, electrons can flow from the anode to the cathode.

Cathodes and Anodes in Pipe Wall

The conducting solution electrolyte in the case of a pipe is the water within the pipe with its dissolved salts. The electrolyte accepts the electrons from the cathode, making the cathode maintain a positive charge which draws more electrons to it. In the case of corrosion of a pipe, the anode, cathode, and conductive material are all found in the pipe wall while the electrolyte is the water within the pipe. If any of these four elements, which make up the corrosion cell, are absent or are not touching each other, then corrosion cannot occur.

8 Responses to “Corrosion and Scaling”