Posted by Water Treatment in Desalination | no responses

The first observation of the existence of ion exchange was made in i845 by Thompson and Spence who, in studying the mechanism of soil fertilization using ammonium sulphate, found that when a solution of it was passed through a tube of soil the ammonium was absorbed and calcium sulphate solution emerged from the column. Systematic studies of this process were made by Way from 1850 onwards. 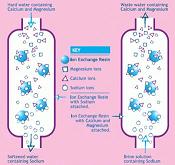 He showed that the exchange process was a general phenomenon, that the quantities of cations exchanged were exactly chemically equivalent to each other and that some ions were held more strongly than others. Way also prepared the first laboratory samples of synthetic aluminum-silicate minerals having ion exchange properties  and he thus laid the foundation of modern exchange theory and technology with a remarkable degree of completeness.

Nevertheless, the process was not used for any practical purpose, until in 1905 Gans in Germany softened water treatment on the industrial scale by replacing the calcium and magnesium ions with sodium, by means of a bed of a natural or a synthetic aluminum-silicate material, Zeolites, which was subsequently reconverted to the sodium form with brine. The Cans patents for this technique were taken up by  companies in every part of the world and during the next 30 years ion exchange water treatment softening became universally used.

One of the most commonly used materials was a natural aluminum-silicate green-sand found in certain parts of America and Australia, and even today there are numerous old green sand water treatment softeners.