The Carrousel system is based on the principle of oxidation ditch where primary settlement, the activated sludge process, secondary settlement and sludge mineralization can take place simultaneously. The original Carrousel system was developed in the Netherlands in the 1970s for the Water treatment of municipal and industrial wastewater. The water treatment concept has been further developed to meet more stringent discharge requirements for waste water treatment plants. The first Carrousel system with internal pre denitrification for enhanced nutrient removal, was put into operation in 1993. In a separate development in recent years, the introduction of draft tube mixers has facilitated the construction of deep Carrousel basins.

The principle of the Carrousel system is based upon the general oxidation ditch technology. A Carrousel basin is shaped like a race track and has a central, longitudinal partition wall. While the wastewater is circulating around the channel, micro-organisms break down the organic compounds, nitrogen and phosphorus containing wastewater. Depending on which mode of system is employed, the intensive internal circulation exposes the activated sludge to a sequence of aerobic, anoxic as well as anaerobic conditions. 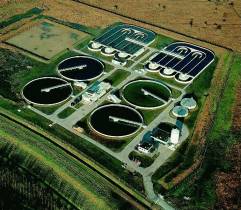 The system will be used to treat wastewater that has only been screened and degritted. Primary clarifiers can be omitted. To stimulate phosphorus removal and to prevent the generation of bulking sludge the Carrousel system can be preceded with a sludge-loading anaerobic tank. Usually, the process design is based on long sludge retention times with extended aeration for the production of stabilised sludge. The waste activated sludge is separated from the effluent in secondary clarifiers.

Usually, the mixed liquor in the Carrousel system is oxygenated by low-speed vertical shaft aerators, to ensure proper mixing and generating the horizontal velocity and turbulence necessary to prevent sludge settling in the circuit. To obtain the most efficient level of BOD and nutrient removal, the power input is adjusted in relation to the actual oxygen demand and load conditions, by varying the speed and the submergence of each aerator. In some cases it is necessary to install submerged, low-energy consuming flow-boosters propellers to maintain the required minimum flow velocity in the channels. The use of such propellers allows an increased operational flexibility.

The Carrousel system can also be operated successfully with other types of aeration process, like diffused air systems. In addition, combinations of mechanical and diffused air aeration have been implemented and are currently in operation. When diffused air systems are used, flow boosters need to be installed for effective propulsion of the sludge-water mixture.

When the surface aerators are equipped with draft tubes, depths of the aeration zone of up to 8 m can be realised, resulting in a considerably reduced footprint. A draft tube is a vertical cylinder underneath an aerator, which extends almost down to the bottom. It enables the aerator to draw (oxygen deficient) water from the bottom of the tank, thereby ensuring proper mixing over the entire tank depth. This principle has proven to work well in practice for rectangular aeration tanks. However, the necessary propulsion effect of an aerator in a Carrousel basin is greatly reduced by the draft tube. This is overcome by installing additional propulsion means, propellers, in the channels of the Carrousel basin.

As a result of the hydraulic characteristics of the Carrousel ditch and the position of the aerators, it is feasible to construct a Carrousel having a channel somewhat larger than 10 m wide by 5 m deep. If draft tubes are used aeration depths of up to 8 meters can be realised. Depending on the capacity of the WwTP, Carrousel systems having 2, 4, 6 or 8 channels can be incorporated and where mechanical aeration is considered a variable number of surface aerators can be installed. The capacity which can be treated in one system can range from 0.5 to 10 MLD. Plants with greater capacities are designed as parallel systems.

The Carrousel system can be fully automated and thus operated without operator attendance and personnel for total plant control and surveillance.

In comparison with other systems, the internal recirculation factor for the sludge-water mixture relative to the influent flow is very high, which has major and distinct advantages.

The energy requirements of a Carrousel system may be slightly higher than a conventional ASP because of the necessary propulsion, but this is compensated by the fact that no recirculation pumps are required for denitrification