Although there is some relation between turbidity of the raw water and the coagulant dosage, the exact quantity can be determined only by trial. Even thus determined amount will vary with other factors such as time of mixing and water temperature. The use of minimum quantity of coagulant to be effective in producing good flocculation in any given water, will usually require a fairly long stirring varying from 15 to 30 minutes in summer and 30 to 60 minutes in the colder months.
Water of low turbidity with very finely divided suspended matter is more difficult to coagulate than water with high turbidity and coarse particles, necessitating a larger quantity of coagulant.

The coagulant dose in the water treatment should be judiciously controlled based on the results of jar test as the turbidity level is continuously changing. The jar test apparatus is shown below 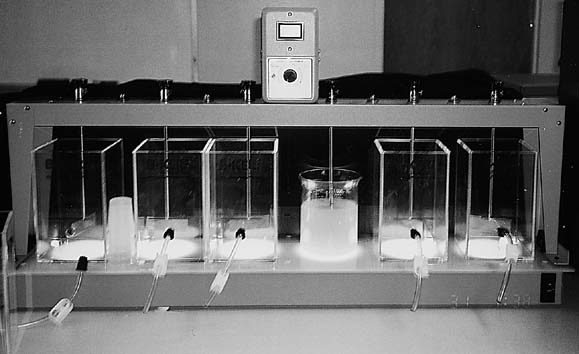 In bulk water treatment, the jar tests are repeated with varied alum dose until the ideal dose is found. The needed dose varies with the pH of the water and the size of the particles. The usual range of alum dose is 10 to 50 mg/L of water.

A well engineered feeding device is an integral part of an effective water treatment program. If a feed system is not designed properly, chemical control will not meet specifications, program results may be inadequate, and operating costs will probably be excessive. Some of the costly problems associated with poor chemical control include:

The chemicals can be fed into water directly by dry feeding in the powder form. Alum being fairly fine and uniform in size can be fed easily by dry feeding. However, copperas and lime can not be fed by dry feeding. Dry feeding devices are generally in the form of a tank with hopper bottom. Agitating plates are placed inside the tank, so as to prevent arching of the coagulant. The coagulant in the powder form filled in the tank, and is allowed to fall in the mixing basin. The dose is regulated by the speed of a toothed wheel or a helical screw. The speed of the toothed wheel or the helical screw is, in turn controlled by connecting it to a venture-device installed in the raw water pipes feeding water to the mixing basin. The quantity of coagulant released is, thus controlled in proportion to the quantity of the raw water entering the mixing basin. Dry feeding devices are utilized in smaller plants.
Wet Feeding Device

In wet feeding, the solution of required strength of coagulant is prepared and stored in a tank, from where it is allowed to trickle down into the mixing tank through an outlet. The level of coagulant solution in the feed tank is maintained constant by means of a float controlled valve, in order to ensure a constant rate of discharge for a constant feed rate of raw water flow into the mixing basin. When inflow of raw water changes, the rate of coagulant feed is adjusted by a conical type arrangement. The working of a conical plug type arrangement is very simple. The mixing basin and the float chamber are interconnected together, so that the water level remains the same in both of them. As the rate inflow of raw water increases the depth of water in the mixing basin as well as float chamber increases, thereby lifting the float. As the float rises, the pinion and pulley rotates in the same direction, thereby lifting the conical plug and allowing more quantity of coagulant solution to release to the mixing basin. When the rate of flow decreases the conical plug descends down and reduces the feeding rate of coagulant to lower rate. Larger water treatment plants are generally use wet feeding devices since they are costlier than dry feeding devices.

Mixing is an important unit operation where one substance must be completely intermingled with another. In water treatment coagulant is mixed into water by rapid mixing. The process of dispersing chemical by mixing is known as rapid mix or flash mix.