Design sewage flow is the expected maximum discharge in the sewer during the life of the system. This is arrived by multiplying the population expected at the end of the design period with the per capita sewage flow and a peak factor. 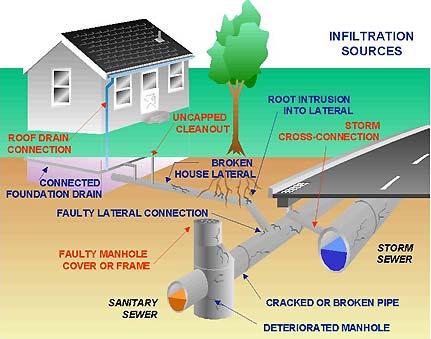 Source: CPHEEO Manual. However, it is advisable to adopt the least of the forecast population based on the different methods, because over design of the components of sewerage system will adversely affect the performance of the system.

As per the Manual on Sewerage and Sewage treatment (CPHEEO, GOI) 80% of the water supply may be expected to reach the sewers. However, the sewers for major cities and towns should be designed for a minimum sewage flow of 150 Lpcd and 100 Lpcd respectively. Industrial wastewaters have to be treated to the standard by the industries before discharging into the sewers.

The design flow of the sewerage system shall be the maximum hourly flow expected in the system or peak flow. The peak flow is the average hourly flow (expected at the end of the design period) multiplied by a peak factor, which depends on the population. The typical values of peak factors for different contributing population of the zone recommended, are shown in Table B

Estimate of flow in sanitary sewers may include certain flows due to infiltration of groundwater. through pipe joints and manholes. Addition of the storm flow to the design sewage flow is to be done only in situation where groundwater table is expected to raise the level of sewers. Suggested estimates for groundwater infiltration into sewers located below groundwater table are furnished in C