Each zone should provide a smooth transition between the zone before and the zone after.

Each and every zone has its own unique purpose. All zones are in a rectangular sedimentation basin. 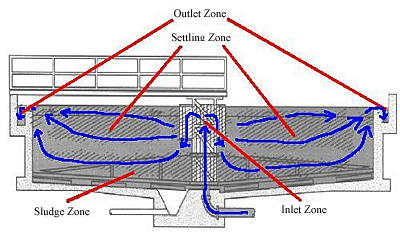 Zones in a Circular Sedimentation Basin

In a square or circular basin (clarifier), water typically enters the basin from the center rather than from one end and flows out to outlets located around the edges of the basin. But the four zones can still be found within the clarifier the above figure.

The two primary purposes of the inlet zone of a sedimentation basin are to distribute the water and to control the water’s velocity as it enters the basin. In addition, inlet devices act to prevent turbulence of the water. The incoming flow in a sedimentation basin must be evenly distributed across the width of the basin to prevent short-circuiting. Short-circuiting is a problematic circumstance in which water bypasses the normal flow path through the basin and reaches the outlet in less than the normal detention time. In addition to preventing short-circuiting, inlets control the velocity of the incoming flow. If the water velocity is greater than 0.15 m/ see, then floes in the water will break up due to agitation of the water. Breakup of floes in the sedimentation basin will make settling much less efficient.

Inlet arrangement for a rectangular basin

The inlet of rectangular basin is shown in Fig. 13.9. The stilling wall, also known as a perforated baffle wall, spans the entire basin from top to bottom and from side to side. Water leaves the inlet and enters the settling zone of the sedimentation basin by flowing through the holes evenly spaced across the stilling wall.

The second type of inlet allows water to enter the basin by first flowing through the holes evenly spaced across the bottom of the channel and then by flowing under the baffle in front of the channel.
The combination of channel and baffle serves to evenly distribute the incoming water.

After passing through the inlet zone, water enters the settling zone where water velocity is greatly reduced. This is where the bulk of settling occurs and this zone will make up the largest volume of the sedimentation basin. For optimal performance, the settling zone requires a slow, even flow of water. The settling zone may be simply a large area of open water.

A weir usually has notches, holes, or slits along its length. These holes allow water to flow into the weir. The most common type is the V -shaped notch shown on the picture above which allows only the top few centimeters of water to flow out of the sedimentation basin. Conversely, the weir may have slits cut vertically along its length, an arrangement which allows for more variation of operational water level in the sedimentation basin.
Water flows over or through the holes in the weirs and into the launder. Then the launder channels the water to the outlet pipe. This pipe carries water away from the sedimentation basin and to the next step in the treatment process. The effluent structure may be located at the end of a rectangular sedimentation basin or around the edges of a circular clarifier. Alternatively, the effluent may consist of finger weirs an arrangement of launders which extend out into the settling basin as shown below.

The sludge zone is found across the bottom of the sedimentation basin where the sludge is collected temporarily . Velocity in this zone should be very slow to prevent resuspension of sludge.
A drain at the bottom of the basin allows the sludge to be easily removed from the tank. The tank bottom should slope toward the drains to further facilitate sludge removal. In some plants, sludge removal is achieved continuously using automated equipment. In other plants, sludge must be removed manually.