Hardness is caused by hard water containing high concentration of calcium and magnesium ions. Water is considered to be hard if it has a hardness of 100 mg/L or more as calcium carbonate. Measurements of hardness are given in terms of the calcium carbonate equivalent, which is an expression of the concentration of hardness ions in water. Hardness generally enters groundwater as the water percolates through minerals containing calcium or magnesium. The most common sources of hardness are limestone (which introduces calcium into the water) and dolomite (which introduces magnesium.) Since hardness enters water in this manner, groundwater generally has a greater hardness than surface water.

Hardness is generally caused by calcium (Ca2+) and magnesium (Mg2+) ions dissolved in water.However, hardness can be caused by several other dissolved metals as well, including strontium (Sr2+), iron (Fe2+), and manganese (Mn2+). All of the hardness-causing ions are divalent cations, meaning that they have a charge of positive two.

Hardness in water is caused by a variety of divalent cations, primarily calcium and magnesium. These cations have a tendency to combine with anions (negatively charged ions) in the water to form stable compounds known as salts. The type of anion found in these salts distinguishes between the two types of hardness – carbonate and non carbonate hardness 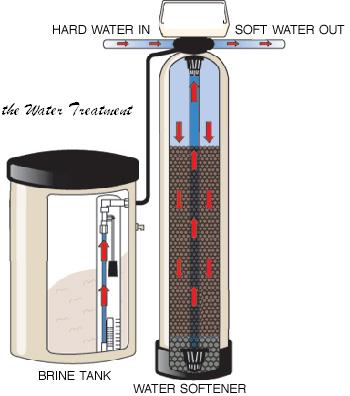 Carbonate hardness is the most common and is responsible for the deposition of calcium carbonate scale in pipes and equipment. The equation below shows how this deposition is formed in the presence of heat:

In addition to the scale ( calcium carbonate) produced, carbon dioxide resulting from this reaction can combine with water to give carbonic acid which causes corrosion of iron or steel equipment.

Non carbonate hardness reacts with the carbonate alkalinity found in soap and detergents as in this reaction and forms soap Scum:

Acceptable concentration of total hardness in water is 200 mg/ L.

The effects of hardness in water are: